Last year, African Rainbow Family had over 10 different organisations that took advantage of our successful 1st Annual Conference, LGBT Asylum Seekers & Refugees Tell Their Stories In Manchester! to showcase once again the amazing works that they do. Report of the conference is available here.

We are delighted to announce that Manchester Migrant Solidarity, WAST Manchester, Safety4Sisters, FiLiA, Rainbow Noir, LGBT Foundation, LISG, Greater Manchester Immigration Aid Unit, Greater Manchester Law Centre and UK Lesbian & Gay Immigration Group have already secured their stalls with us this year! You can still enjoy the same. Book a stall with us and see how much difference exhibiting your great work at our conference of expected 200+ delegates can make to your organisation. Limited stalls left, book here now!

African Rainbow Family has been incredibly blessed by the generosity of The Federation, Co-op Digital , Olimpia Burchiellaro, Kirit Patel, through funding the Co-op Foundation has received from Omidyar Network and UK Lesbian & Gay Immigration Group whom are sponsoring different parts of our Unreported! Sexual Abuse & Exploitation of LGBTIQs Seeking Asylum, UK 2018 Annual Conference!  You and or your organisation can still join our valuable sponsors this year to sponsor other bits of the conference. Contact info@africanrainbowfamily.org on how you can be involved this year or for 2019.

As you are aware, African Rainbow Family is a non-for profit charitable movement supporting over 250 LGBTIQ people seeking asylum (and still counting) in the UK whilst intensifying our work of global equality campaign for ‘A World Without Prejudice’. We operate with little or no money but rely on people like you.

Can you help? Will you chip in £5, £10 or more every month to help our work? We would remain grateful for that. Contact us or visit our website for details of how to set up a monthly standing order, make one off donation and other ways to support to us.

Part of History: Celebrating Whom we Are Report

African Rainbow Family is very humbled to have been able to put together a successful  first ever LGBTIQ refugee conference in the UK that calls for end to ‘vile’ proof of sexuality policy with the generosity  of The New Beginnings Fund thus:

We are proud to say that our Part of History conference event poster has since 21st June 2017, been added to items displayed till date in the People’s History Museum Manchester for visitors to view and learn from. This would eventually be archived for future reference following the Museum’s archiving procedures. Following the conference, our branch in Birmingham has been experiencing increased referrals too and now looking to have a new branch in other part of the UK.

African Rainbow Family would like to say a huge thank you to all our guest speakers, panelists, group members, volunteers, conference delegates, friends and funder that made the conference possible.

Using this opportunity to watch out for our next Annual Conference 2018 coming soon!

The Lesbian Visibility Day means a lot. It is for us as lesbians to celebrate our richness in diversity, be proud of ourselves and work in solidarity with other oppressed groups. To me, I see it as a day when we celebrate whom we are as non conforming to heteronormative narrative and ask for freedom for those denied freedom to be who they are especially lesbian people seeking asylum hence African Rainbow Family celebrates Lesbian Visibility Day as we use it to also continually raise awareness about lesbian people of colour and demanding a fair and humane asylum system for lesbians as part of our vital work in supporting people seeking asylum.

“I find my invitation to the European Parliament to speak about issues faced by lesbians seeking asylum in Europe including the demand to end detention, deportation and unsafe living conditions for lesbian* people seeking asylum and refugees at the European Lesbian* Conference (EL*C), organised in collaboration with the European’s Parliament Intergroup on LGBTI Rights to be well thoughtful and positive steps in expanding the conversation to be inclusive of lesbians of colour and those seeking sanctuary” says Aderonke Apata, founder of African Rainbow Family.

It is important that we are visible as lesbians in order to avoid our erasure! There are many lesbians around the world that live in fear of freely identifying as one in countries that criminalise love especially in the 36 Commonwealth countries where love is illegal including Nigeria that also has death penalty in place. The more we celebrate Lesbian Visibility Day, continue the conversation; the more we raise awareness around the fact that love is not illegal, encourage lesbians in the closet to ‘come out’ and demand their freedom to be who they are.
This brings me back home to lesbian women that are seeking asylum in the UK and other countries alike. The treatment of lesbians seeking asylum in the UK by the Home Office is disgraceful and appalling! This dates back to the homophobia exported to Commonwealth countries by Britain; although Prime Minister Theresa May has apologised for this. The culture of disbelief of lesbians seeking asylum is egregious, we are locked up indefinitely in detention centre and a high proportion get deported cruelly back to their countries to face torture. The institutionalised homophobia of Home Office is of the highest order; they believe that you cannot be a lesbian and have child(ren) or have been married previously due to conforming to societal norms. This is one of the reasons why Lesbian Visibility Day is so important.

We Are Human campaign

African Rainbow Family’s We Are Human declaration campaign is asking that you join us in pledging to change the conversation and refer to us as (LGBT) People Seeking Asylum And Refuge and not asylum seekers. Read the full declaration here.

To sign up to the declaration on behalf of an organisation or yourself, complete the form below or send an email to info@africanrainbowfamily.org with the following information: Organisation, Name, Position in organisation. Use #WeAreHuman on social media. 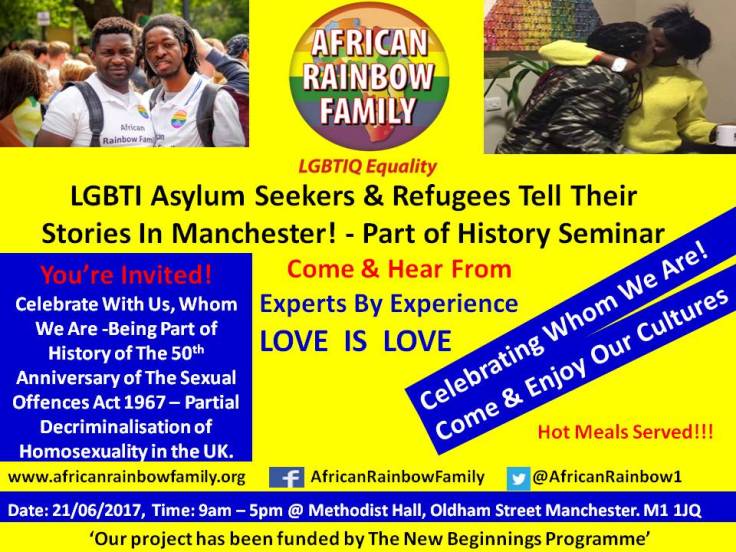 Manchester will host the first ever LGBTIQ asylum seeker and refugee conference today [21st June], marking 50 years since the landmark Sexual Offences Act 1967 made the first steps towards decriminalising homosexuality in the UK.

The conference will feature LGBTIQ refugee speakers telling their stories, exploring changes in attitudes in the UK in the last 50 years and highlighting the plight still faced by LGBTIQ asylum seekers today.

In many countries, particularly in Africa, homosexuality remains illegal and violent attacks on LGBTIQ people are common. Many are forced to flee, some to the UK, after being publicly ‘outed’.

Gay asylum seekers coming to the UK face significant barriers. The Home Office refuses to accept that any asylum seekers are homosexual unless they provide ‘proof of sexuality’. Until recently, the Home Office had deported LGBTIQ asylum seekers on the grounds that they could ‘be discreet’ about their sexuality in their home country to avoid harm – that was ruled unlawful in 2010.

The conference is being organised by African Rainbow Family (ARF), a group that supports LGBTIQ people of African heritage and wider BAME in the UK. ARF works with the growing African LGBTIQ asylum seeker and refugee communities who face harassment, hate crimes and discrimination.

It will see a call on the Home Office to abandon its ‘proof of sexuality’ policy, which ARF says is demeaning and cruel.

Aderonke Apata, Founder of the ARF and a long-term campaigner on LGBTIQ asylum, who is also speaking at the conference, said:

“Despite the gains in acceptance of LGBTIQ people in the UK, LGBT asylum seekers’ and refugees’ situation remains precarious. The Home Office needs to catch up with the rest of the UK, drop its vile ‘proof of sexuality’ policy and move on from 1967.

“I hope the Home Office will listen to the message coming out of our conference and treat everyone with the decency and respect they deserve.”

More information and tickets to the conference:https://www.eventbrite.co.uk/e/lgbt-asylum-seekers-refugees-tell-their-stories-in-manchester-tickets-34762202684?aff=eac2

Homosexuality remains a criminal offence in 75 countries and in 14 is punishable by lengthy imprisonment and death – including in Nigeria, Uganda, Cameroon, Central African Republic and Pakistan. 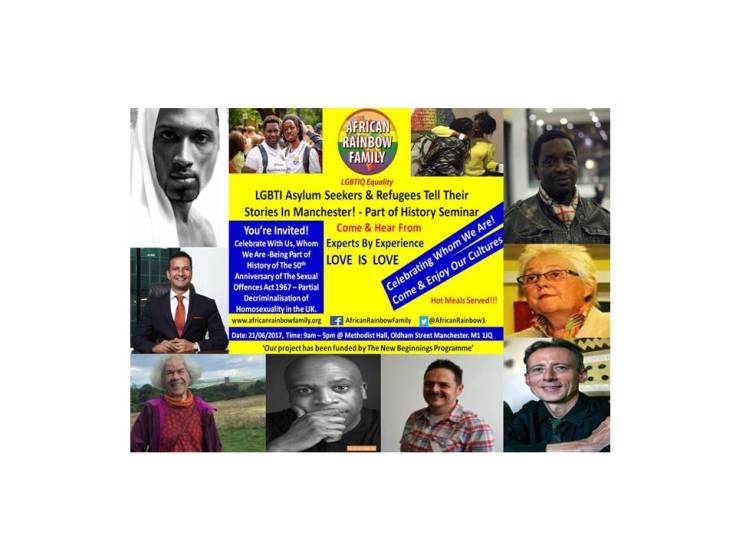