On Wednesday, 30th September 2015, Aderonke Apata, a Nigerian lesbian, global Lesbian, Gay, Bisexual, Transgender, Intersex and Queer (LGBTIQ) equality advocate, feminist and human rights activist was joined by many LGBTI activists in a rally to deliver petition signatures of over 70,000 demanding the repeal of Nigeria Anti Gay Laws to the Nigeria High Commission in London. The rally was organised by African Rainbow Family and supported by Peter Tatchell Foundation and Out and Proud.

Aderonke, leader of the campaign and rally recounts her experiences at the rally attended by over 100 people including leading human rights activist, Peter Tatchell of the Peter Tatchell Foundation thus:

“My country, Nigeria shut her doors against me just because I am a lesbian! Today, I am joined by nearly 80,000 freedom lovers all over the world including those present here to deliver this petition signatures calling on President Muhammadu Buhari to repeal Nigeria’s toxic and harshest same-sex marriage and relationships laws; what did I get? Shut doors!” 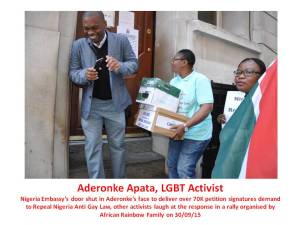 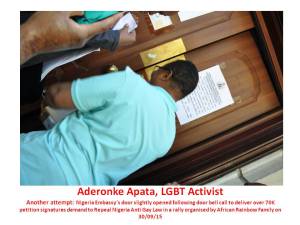 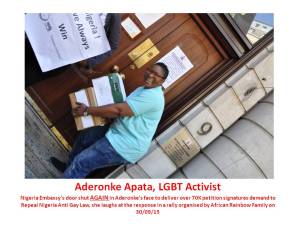 The rally had a turn out of over 100 people, and attracted many media reports both local and international news. News coverage could be found in Gay Times Magazine, Gay NewsNetwork, Diva Magazine and ERASING 76 CRIMES. Even the leaders of the Catholic church in Nigeria were quick to react to our call to repeal Nigeria antigay laws. In The Tablet News published on 1st October 2015, they said: “We do not advocate punishing gays, say Nigerian bishops” .

It wasn’t business as usual at the Nigerian Embassy when activists arrived around lunchtime on Wednesday, 30th Sept. All of their doors were shut. No movement in and out of the building was allowed the minute Aderonke requested to see a senior official of the embassy whom she could hand over the petition to en route delivery to the Nigerian President.

Everyone present at the rally in front of the Nigerian embassy was on the look-out for any of the three doors leading into the building that could be accidentally opened, just so we can request entrance. The minute we are made aware of any opened door, we would approach the guard; but get a rebuff. Eventually all movements were suspended till we left at about 3pm.

“What amazes me most was that, one of the embassy staff who was returning from his lunch break told me the reason why the embassy didn’t want to collect the two boxes containing the petition signatures was because the embassy wasn’t informed of such delivery prior to the day of the rally. However when a friend of mine that came to support me at the rally later took the boxes to the door, a guard at the embassy collected them from her and even signed a sheet of paper as proof of receipt!” continues Aderonke. 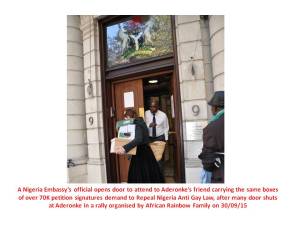 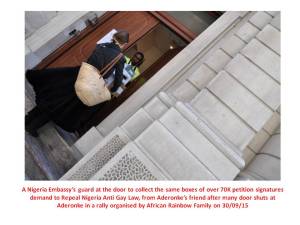