Obama’s Good News Tides For Africa – LGBT Rights, True Democracy For Africa President Barack Obama of the United State of America has embarked on a landmark revolutionary turn around journey of Africa as a whole. The messages of hope, inspiration and optimism by the US president have come at a time when all African nations need a revamp of their machineries.

To kick start this historic milestone in showing his commitments to reforming and boosting Africa and placing her on top of the world’s agenda, Obama extended a personal invitation to the Nigerian newly elected president, Muhammadu Buhari who visited Washington on 20th July 2015.

Nigeria in 2014, passed the harshest law against homosexuality which seeks to criminalise LGBT people to up to 14 years imprisonment. LGBT supporting organisation are not spared of jail terms either. The US visit however,  was essentially to rebuild the broken bilateral relationships between the two countries and thought to restore international confidence in the crumbling political, social and economic stands of Nigeria. Buhari reiterated his commitments to national security, war against terrorism from Boko Haram, war against the endemic bribery and corruption culture which has eaten into the fabric of Nigeria, trade and economic relations.

Little did we know it was to be followed by opening a huge tunnel of opportunities for Africa, both economic and human rights reforms. The world’s most powerful leader has chosen to physically go to Africa and preach the good news of equality and human rights especially in the wake of criminalisation of homosexuality across most African countries.

Obama during his visit to Kenya said: “I’ve been consistent all across Africa on this. When you start treating people differently,because they’re different, that’s the path whereby freedoms begin to erode. And bad things happen”. This message seems to sound toxic so far to presidents Mohammadu Buhari and his counterpart Uhuru Kenyatta of Kenya.

On Wednesday 20th July Buhari rejected gay marriage push from Obama and said  that ” sodomy is against the law of Nigeria and strange to our culture” says his spokesperson; whilst Kenyatta said “gay rights issue is a non-issue for Kenyans”!

Read the open letter to Obama and sign the petition to repeal the Nigerian Same-sex marriage prohibition law  here and here.

To support the work of African Rainbow Family, contact us here.

The newly elected president of the most populous nation in Africa, president Muhammadu Buhari of Nigeria has accepted the continuous onslaughts of his country’s citizens as opposed to promoting freedom, equality and the human rights of the LGBTIQ minority of Nigeria.

During Buhari’s visit to the US last week between Sunday, July 19 and Wednesday, July 22;  the need to repeal Nigerian Anti Gay law as contained in an open letter to President Obama requesting that he intervenes and pressures Buhari to repeal the Nigerian Same-sex marriage prohibition law was raised. Unfortunately he rejected to do so; this leads to missing a milestone which would have been a huge landmark in equality and human rights for all Nigerians and indeed the whole of Africa.

The Washington visit was meant to discuss the U.S government supports for Nigeria. President Obama was said to have told Buhari that: “The destiny of the continent was tied to Nigeria’s, he said, pledging that America would continue to support, as long as Nigeria does the right things”.

It beggars good reasoning and the worth of humanity what the priorities for Nigerians are from their newly elected president!

“A president who prefers the continuous maiming, mass massacre, torture, displacement and gruesome raping of his country’s citizens to LOVE needs to reconsider his or her position in my view” says Aderonke Apata, founder of African Rainbow Family.

Fair enough president Buhari has shown his commitment to combat and rid Nigeria of her number one spiral historic endemic ‘disease’ – bribery and corruption. He also promised to retrieve Nigerian looted money starched away in foreign countries. This is a welcome move and hopefully he achieves it.

However, it’s beyond imagination that the rights of ordinary harmless minority group in Nigeria who only shows love towards each other in consensual relationships could be traded off for the daily mayhem caused by Boko Haram. Read about the February 2015 Africa Rainbow Family’s candle lit vigil in solidarity with victims of Boko Haram massacre in Baga here.

Other benefits for Nigeria’s advancement were also rejected by her custodian all in the name of culture and religion.

We call on president Buhari to take a better inward reconsideration of his stand and move away from being ‘cowed’ by the so called religious leaders who only care about themselves under the pretence of upholding God’s commandments.

“I Am Baga Too”: Manchester Marches Against Boko Haram 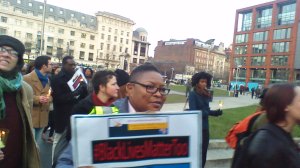 Exactly seven days before Valentine’s Day, central Manchester was occupied by activists marching in solidarity with the victims of Boko Haram’s heinous January attacks. Not only did the vigil – organised by self-funded collective African Rainbow Family (ARF) – condemn the attacks, but it raised the alarm against the lack of mainstream media coverage. With people from various backgrounds, ethnicities, ages and faiths, up to 60 activists gathered in Piccadilly Gardens, having walked from St Peters Square via Market Street where the march commenced.

Echoing the reverberation of the megaphone’s “I Am Baga Too” and “Black Lives Matter Too”, the protesters peacefully marched with lit candles and placards denoting the value of all human life, regardless of background or social standing.

Despite the outbreak of news interest in the initial kidnappings of 200 schoolgirls in March 2014 – including a social media hashtag campaign that even Michelle Obama took part in – little-to-no light has been shone over Boko Haram’s further spate of abductions of women and recent bombing of an estimated 2,000 civilian lives.

The rally’s aim was to raise awareness of those neglected by mainstream media and to provoke “a national debate with western and African leaders” driven towards active change rather than lip-service, founder of ARF Aderonke Apata told TNT.

RF is the group behind last December’s march along Portland Street, Manchester. The convention saw hundreds of activists protesting against institutionalised injustices such as that which happened to the late Mike Brown from Ferguson, Missouri USA.

“Going forward, we want to see more communication between activist groups and volunteers. We want to connect with each other as we are more powerful together. Ultimately we want community voices to be heard,” one of the co-organisers said.

Terrorist militant group, Boko Haram, has taken over the Baga town of north-east Nigeria. It continues its monstrous crimes against thousands of innocent women and children. Activists feel there is no other option but to take to the streets in protest, rather than mirror the meek and passive reaction of mainstream media. The next public meeting has been provisionally booked according to ARF group; however, the date will be confirmed soon. In the meantime, we should all continue to let the appalling silence burst away from us. More details of the news coverage of the vigil can be found  here. 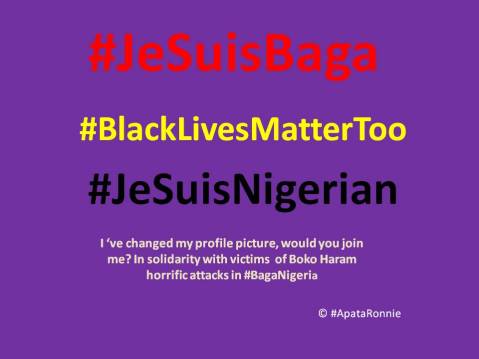 Join us as we march ARM-IN-ARM in solidarity through Manchester in remembrance of those who have lost their lives in tragedies neglected by the mainstream, to stand with all those affected by the hateful Boko Haram group, and to remind the world that @BlackLivesMatterToo!

We will gather at St Peter Square and make our way to Piccadilly Gardens, where we will have our speakers.

This barbaric and horrific Baga attacks which took place between the 3rd and 7th of January 2015 have been underreported. A confirmed 150 people lost their lives, with an estimated number of over 2000 strewed bodies unaccounted for, and over 35,000 displaced by the violence of Boko Haram.

Boko Haram are a terrorist organization affi…liated with Al-Qaeda, active in Nigeria, Niger, Cameroon and Chad. Governments are reported to have misreported/underestimated the numbers of victims in an attempt to downplay the threat of this organization, who have so far claimed over 7000 lives since 2009, and forced more than a million to flee.

In April 2014 Boko Haram kidnapped 276 schoolgirls, the majority of which remain missing to this day -:http://bringbackourgirls.us/
Join invite page https://www.facebook.com/events/621914561246282/
Speakers include:

Human Rights Activist, LGBTIQ Equality Advocate and Feminist. An unstoppable force in fighting for justice. she started the shutdown Yarl’s Wood campaign from inside Yarl’s Wood in 2012. In spite of terrible violence and human rights violations, chose to stand up not only for herself, but for others who have experienced injustice and continue to challenge the government and legal system that penalises the many LGBT refugees seeking asylum in the UK.

Winner of the Positive Role Model for LGBT National Diversity Awards 2014 and number 41 on the 101Independent Newspaper’s Rainbow list 2014 Most Influential LGBT people in UK.

A Cultural and Political Activist from Angola; also a video producer for different African TV stations in the UK such as Bentv, Mwangoletv and Soltv.