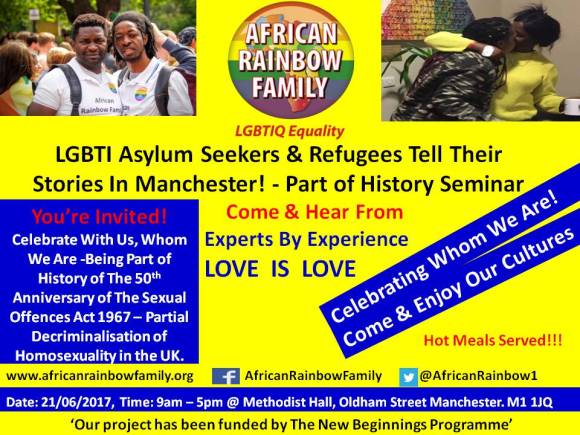 Manchester will host the first ever LGBTIQ asylum seeker and refugee conference today [21st June], marking 50 years since the landmark Sexual Offences Act 1967 made the first steps towards decriminalising homosexuality in the UK.

The conference will feature LGBTIQ refugee speakers telling their stories, exploring changes in attitudes in the UK in the last 50 years and highlighting the plight still faced by LGBTIQ asylum seekers today.

In many countries, particularly in Africa, homosexuality remains illegal and violent attacks on LGBTIQ people are common. Many are forced to flee, some to the UK, after being publicly ‘outed’.

Gay asylum seekers coming to the UK face significant barriers. The Home Office refuses to accept that any asylum seekers are homosexual unless they provide ‘proof of sexuality’. Until recently, the Home Office had deported LGBTIQ asylum seekers on the grounds that they could ‘be discreet’ about their sexuality in their home country to avoid harm – that was ruled unlawful in 2010.

The conference is being organised by African Rainbow Family (ARF), a group that supports LGBTIQ people of African heritage and wider BAME in the UK. ARF works with the growing African LGBTIQ asylum seeker and refugee communities who face harassment, hate crimes and discrimination.

It will see a call on the Home Office to abandon its ‘proof of sexuality’ policy, which ARF says is demeaning and cruel.

Aderonke Apata, Founder of the ARF and a long-term campaigner on LGBTIQ asylum, who is also speaking at the conference, said:

“Despite the gains in acceptance of LGBTIQ people in the UK, LGBT asylum seekers’ and refugees’ situation remains precarious. The Home Office needs to catch up with the rest of the UK, drop its vile ‘proof of sexuality’ policy and move on from 1967.

“I hope the Home Office will listen to the message coming out of our conference and treat everyone with the decency and respect they deserve.”

More information and tickets to the conference:https://www.eventbrite.co.uk/e/lgbt-asylum-seekers-refugees-tell-their-stories-in-manchester-tickets-34762202684?aff=eac2

Homosexuality remains a criminal offence in 75 countries and in 14 is punishable by lengthy imprisonment and death – including in Nigeria, Uganda, Cameroon, Central African Republic and Pakistan.

African Rainbow Family is a grassroots registered Charity (Reg Number: 1185902) that supports LGBTIQ people of African heritage including refugees, LGBTIQ people seeking asylum and the wider BAME in the UK. Responding especially, in the wake of the growing toxic anti-gay persecutions they face for their sexual orientation and gender identity.