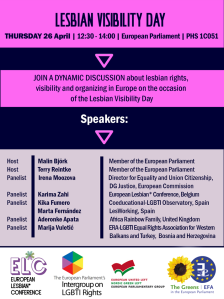 The Lesbian Visibility Day means a lot. It is for us as lesbians to celebrate our richness in diversity, be proud of ourselves and work in solidarity with other oppressed groups. To me, I see it as a day when we celebrate whom we are as non conforming to heteronormative narrative and ask for freedom for those denied freedom to be who they are especially lesbian people seeking asylum hence African Rainbow Family celebrates Lesbian Visibility Day as we use it to also continually raise awareness about lesbian people of colour and demanding a fair and humane asylum system for lesbians as part of our vital work in supporting people seeking asylum.

“I find my invitation to the European Parliament to speak about issues faced by lesbians seeking asylum in Europe including the demand to end detention, deportation and unsafe living conditions for lesbian* people seeking asylum and refugees at the European Lesbian* Conference (EL*C), organised in collaboration with the European’s Parliament Intergroup on LGBTI Rights to be well thoughtful and positive steps in expanding the conversation to be inclusive of lesbians of colour and those seeking sanctuary” says Aderonke Apata, founder of African Rainbow Family.

It is important that we are visible as lesbians in order to avoid our erasure! There are many lesbians around the world that live in fear of freely identifying as one in countries that criminalise love especially in the 36 Commonwealth countries where love is illegal including Nigeria that also has death penalty in place. The more we celebrate Lesbian Visibility Day, continue the conversation; the more we raise awareness around the fact that love is not illegal, encourage lesbians in the closet to ‘come out’ and demand their freedom to be who they are.
This brings me back home to lesbian women that are seeking asylum in the UK and other countries alike. The treatment of lesbians seeking asylum in the UK by the Home Office is disgraceful and appalling! This dates back to the homophobia exported to Commonwealth countries by Britain; although Prime Minister Theresa May has apologised for this. The culture of disbelief of lesbians seeking asylum is egregious, we are locked up indefinitely in detention centre and a high proportion get deported cruelly back to their countries to face torture. The institutionalised homophobia of Home Office is of the highest order; they believe that you cannot be a lesbian and have child(ren) or have been married previously due to conforming to societal norms. This is one of the reasons why Lesbian Visibility Day is so important.

African Rainbow Family is a grassroots registered Charity (Reg Number: 1185902) that supports LGBTIQ people of African heritage including refugees, LGBTIQ people seeking asylum and the wider BAME in the UK. Responding especially, in the wake of the growing toxic anti-gay persecutions they face for their sexual orientation and gender identity.